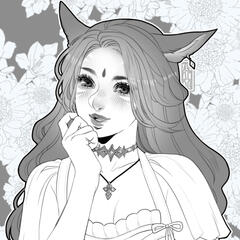 Please use /tell! Walk-ups welcome.
For in-depth roleplay or making long-term connections, please contact me on Tumblr or Twitter. I’m selective with Discord.

Hello! It’s a pleasure to meet you.

OOC: This profile is a work in progress! I’m new to FFXIV roleplay, but have been playing for 2+ years and roleplaying for 10+ years.

Height: 5 fulms, 4 ilms (5’4”)
Body type: Slim, but well-fed with subtle muscle
Hair color: Silvery gray
Eye color: Yellow green
Markings: Two white stripes on her temples, three white stripes on her cheeks, and a traditional tattoo in the shape of a teardrop in the center of her forehead. She also has the standard Keeper fangs.
Accessories: Never seen without a pair of earrings, usually crystal or floral shaped
Scent: Subtly sweet and woodsy, a combination of working with plants and outdoors. Oftentimes, there’s a hint of lavender.

Languages: Common Eorzean
Birthplace: Unknown, abandoned by a Keeper of the Moon tribe
City state: Gridania
Residence: Lavender Beds
Religion: Not particularly religious, but is respectful of those who are, as well as the Twelve
Patron deity: Menphina, the Lover

Profession: Former mercenary, currently botanist and herbalist + healer
Hobbies: Going out gathering, studying for her profession, exploring the landscape, accepting a quest or two for extra gil, casually attending local events
Other skills: As a former mercenary, she’s skilled with a lance. She was once part of the Lancers’ Guild in Gridania, but gave it up in favor of healing: both with homemade remedies and a dash of magic.

HERBALIST | Saeta is relatively new to botany and herbal remedies, which means she’s always experimenting. There’s a number of ways you could lend her a hand: providing her with unfamiliar flora, tips from your own experiences, or even testing out a concoction.

HEALER | As a former adventurer, she’s no stranger to injuries. Maybe you’ve been attacked, and are now in need of her services. Whether it’s simply a scratch or far more dire, she would waste no time patching you up to the best of her abilities.

SHOPKEEPER | On certain days, you may find her at a stall in Gridania, like many shop owners. There, she sells flowers and herbs and all types of handcrafted potions. You could try to bargain, but be warned, she’s quite the haggler.

EXPLORER | She’s been to the city states and their surrounding areas, but rarely ventures out into seriously dangerous territories. Perhaps you could be her guide, or, if you would rather stick to safer terrain, just take a pleasant hike and enjoy the view together.

FRIENDLY FACE | After essentially retiring, she has mellowed out quite a bit. She would happily offer respite to any weary souls who might be willing to share their stories with her.